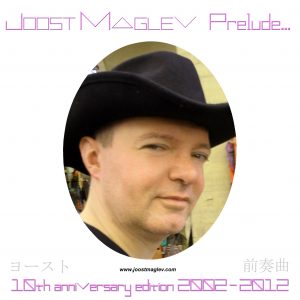 “When I bought my first recording gear (DAW) in 2002 this is what I did. All inspired by my favourite artists I tried to make Magic Lantern sound as much like Gackt as possible, and Nymph as much like Valensia’s Gaia. At the time I was really proud, but as I continued to get better at recording and mixing (the purchase of a proper synthesizer and a condenser microphone, and the fact that I did vocal training eversince helped) I treated the Prelude recordings as sub-par and didn’t want anything to do with them. When in 2005 I released a full-length album of old demo recordings these weren’t even included…

I did remember the time I put in them and how fresh it sounded at the time, so 10 years after I did this first recording I decided to redo everything, with better equipment, better singing technique and with the help from friends like Sebas on guitar and mixing. Magic Lantern was restored to its original full length when it was played by my band back in 1996. Now with these three tracks and a bonus track sounding as I want them, I’m confident to also include the original demo from 2002 (on CD only, not available online) so you can hear how much I progressed in 10 years.”